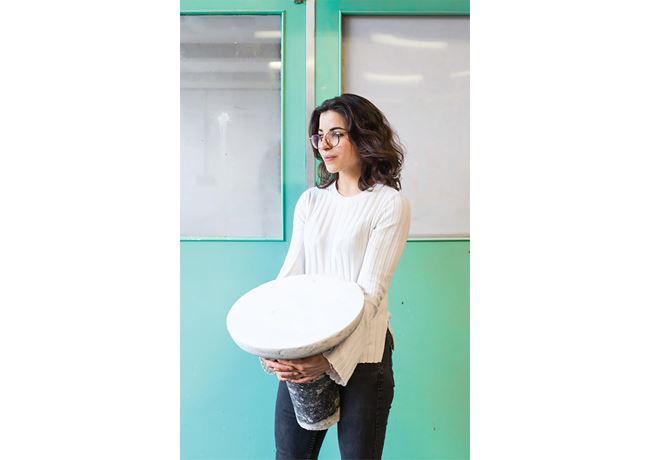 Born in Paris, Roxane Lahidji is a designer and artist whose work centres on experimentation with materials and techniques. Committed to sustainability, her designs reflect contemporary concerns about the environment. Her studies began with a BA course in illustration and product design in Strasbourg (at the HEAR). She then gained an MA from the Social Design department of the Design Academy Eindhoven in 2017. Having graduated, her 'Marbled salts' project’ gained widespread acclaim. She was named one of the 100 best French international designers in the VIA French Design 100 list and was awarded the 2019 Bolia Design award. She describes her development of salt as a material as follows: "In ancient times salt was rare and costly. Yet, since the industrial revolution it has become so cheap and easily available that we longer recognise its value. With ‘Marbled Salts’, Roxane Lahidji explores new possibilities, reinventing salt as a sustainable design material. She makes use of its unique physical properties as a self-binding composite to create a set of tables and stools. By mixing it with tree resin, she gives it shape and strength. Coal powder and natural colour variations in salt mimic the aesthetics of expensive natural stone such as marble. Herein she draws a contradictory parallel between the flexible versatility of salt and the material language of heavy and solid rock. The design also aims to invite a discussion on the concept of value – essentially a social construct − and the costs the finished product implies." Today, she is working on new projects and partnerships in the Zaventem Studios in Belgium. She has participated in a number of exhibitions and design fairs such as Collectible in Brussels. Her work is also exhibited by several international galleries who have also chosen to present it at art and design fairs such as PAD Paris.