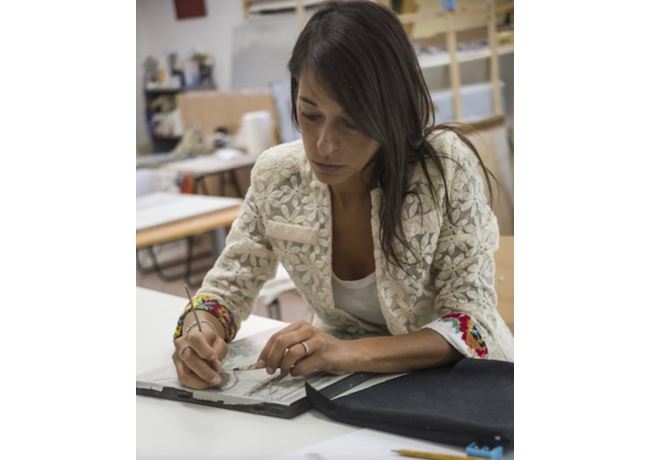 Having studied at the Albertina Academy of Fine Arts in Turin and at the Polytechnic University of the Arts in Valencia, Roberta Verteramo became an international contemporary art conservator, establishing the Triennale Museum Laboratory in Milan, where she had the opportunity to meet and collaborate with internationally known artists and designers such as Gaetano Pesce, Alessandro Mendini, Tomas Maldonado, Frank Gehry, Italo Rota and Fornasetti. The inspiration she gained from this fed into her own design work, and in 2011 a number of her pieces were presented at a private exhibition curated by Philippe Daverio at the Fuori Salone del Mobile 2011 in Milan. This was the beginning of her creative career, which took her to London in 2014. A number of luxury brands including VisonnaireHome, San Lorenzo Yacht, Minotti and Salvioni have selected and showcased her designs, and her highly collectible limited edition pieces have been featured in leading international design fairs such as Design Miami/Basel, PAD London and Paris, Masterpiece, Decorex London and TEFAF Maastricht.
Since the early stages of her artistic career, Roberta Verteramo has been passionate about the design world. Experimentation with mediums and forms of artistic expression has been key to her development as an artist. The natural world remains a constant source of inspiration. Organic and yet highly structural, her pieces seamlessly combine her artistic vision with the properties of the bronze or resin that give them form. Her Rhizoma table, in resin and bronze, exemplifies her approach: Rhizome means root, and here touch and vision are confronted with the contrasting textures and surfaces that evoke the subterranean power of the natural world.